Bitcoin has been among the most fascinating tradable assets to watch over the last year. From reaching dazzling new heights to its most recent tumble to fresh one-year lows, the cryptocurrency market has been nothing short of exciting when attempting to characterize its volatile ebb and flow.

Amid the growing chorus of enthusiasts, activists and investors calling for greater adoption — and more importantly, the launch of new financial instruments designed to give the budding new asset class greater exposure — Bitcoin prices have become a bellwether for the market. While still difficult to nail down an exact characterization of cryptocurrency and how it fits within the modern financial paradigm — whether a currency, digital asset or a commodity — by evaluating the price action in the context of its more established analogues, it becomes apparent that Bitcoin and its peers have reached significant milestones.

By analyzing the characteristics of Bitcoin’s ascent in tandem with commodities like gold and oil or technology stocks that managed to survive the last tech bubble, it is easier to clarify Bitcoin’s position within the context of past performance and how that may relate to the coin’s outlook. Is the run up really that unprecedented? Or instead, is price performance more of a self-fulfilling prophecy that is bound to experience periods of accumulation, consolidation and distribution akin to rotation evident in other, more established asset classes? We took a side-by-side look to see what types of clues can be gleaned in this historical price context and how Bitcoin stacks up when ranking performance.

The fact that it has existed for 10 years — despite drawing the ire of regulators, experiencing several exchange hacks, and devolving into a scaling stalemate — Bitcoin is a modern marvel. Many have compared it with gold and have even assigned Bitcoin the moniker “digital gold” — and in some ways, this assessment is accurate.

Where gold and Bitcoin are similar lies in the properties of scarcity and inputs required to “mine” (the minting of new assets). They’re uncontrolled by a single entity and extremely difficult to counterfeit. Their downsides are also alike, with limited fungibility despite their generally accepted value and with both being used as haven assets during times of market uncertainty.

When comparing Bitcoin and gold’s charts (top and bottom), there are also similarities. For example, both assets began without having exchange-traded funds (ETFs), with Bitcoin still lacking one. The chart below shows gold before physically backed ETFs were introduced around 15 years ago. 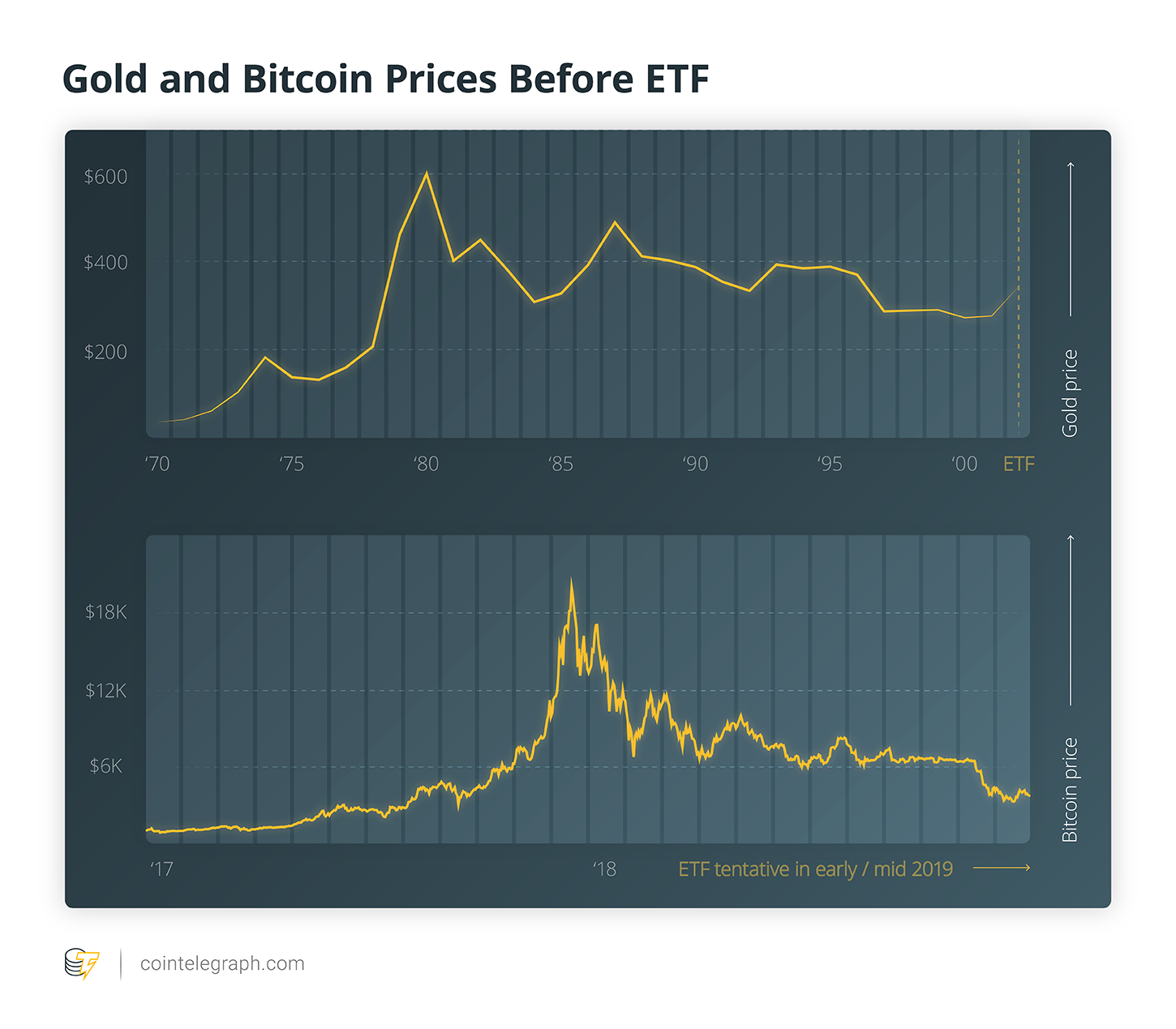 Despite their differing timelines, there are noteworthy similarities when comparing Bitcoin’s pre-ETF chart. It makes perfect sense given that the advances of modern technology accelerate the same chart curves for Bitcoin, whereas gold’s market matured over a series of decades. Furthermore, it suggests that a physically backed ETF contract would do the same for Bitcoin as it once did for gold. After the first gold-backed ETF by ETF Securities hit the market in March 2003 — and later, when the GLD ETF was introduced — prices increased to nearly $1,600 from a low of $332. These developments also improved price discovery and liquidity for the gold market while inviting more widespread retail participation. 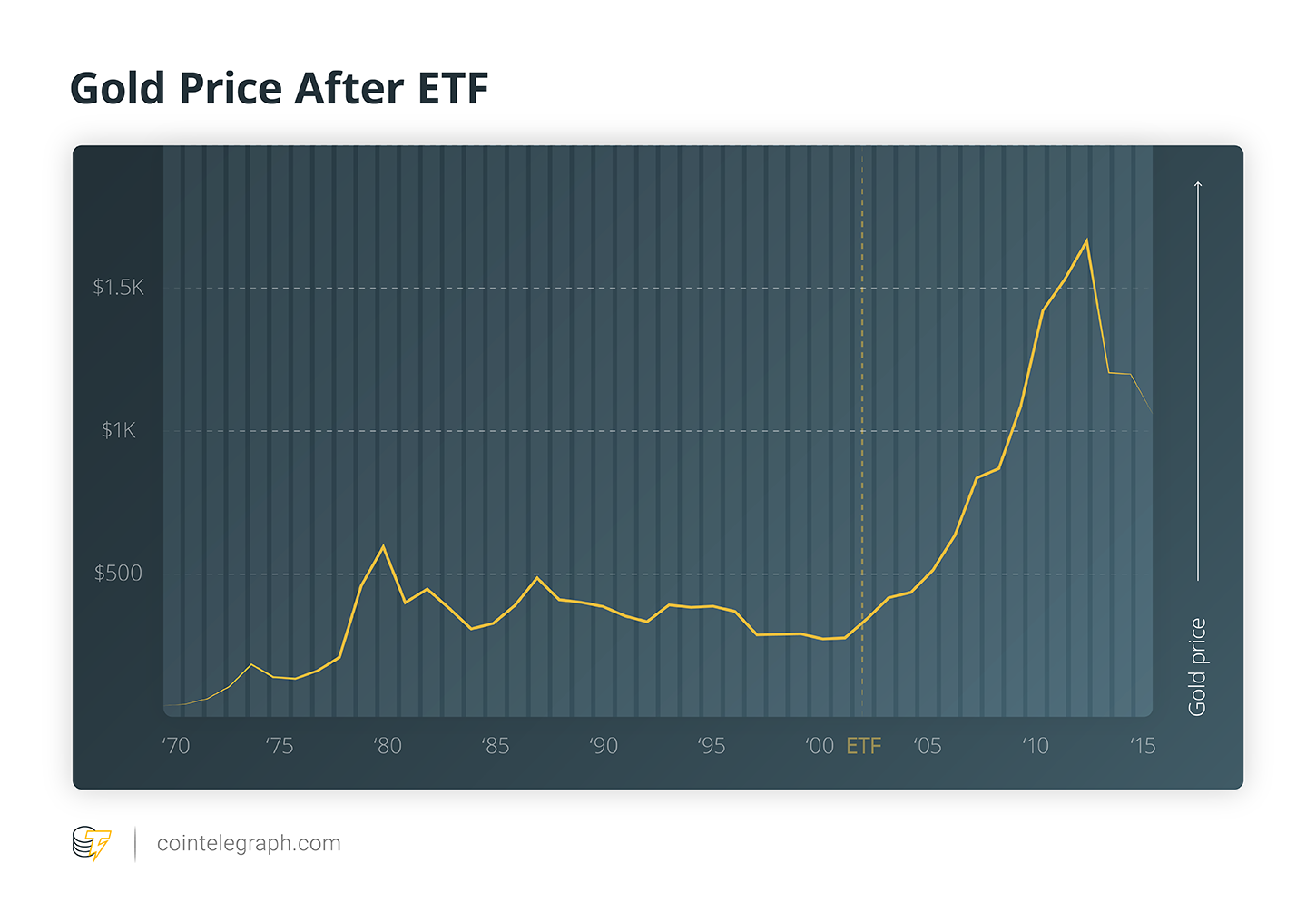 An ETF launch might lead the next Bitcoin bull run, just as it once did to gold. Currently, exposing one’s capital to BTC is reminiscent of investing in gold in the 1980s and 1990s, which favored specialists who knew how to obtain and store it physically.

As both are considered to be a haven asset, and in terms of transaction volume, gold is gradually being usurped by its digital peer, the correlation between these two assets may be more divergent in the future. Investors increasingly choose Bitcoin and crypto over gold in times of turbulence, and Bitcoin transaction volumes recently surpassed gold for the first time ever. According to the London Bullion Market (LBMA), gold is anticipated to clear $446 billion in settled OTC trades during 2018 while Bitcoin has already recorded $850 billion in transaction volume this year.

Can crypto sync with tech stocks?

Another potential muse for cryptocurrency and Bitcoin could be the tech sector, and it may be an even better control group, given that their utilities align well. Bitcoin currently accounts for slightly over 51 percent of the total cryptocurrency market capitalization. However, looking at one coin is akin to missing the forest for the trees, with a significant contribution coming from other novel coins and solutions that have since entered the fray, including ICOs.

Blockchain represents to businesses what the internet was in 1995 — a better medium for reaching consumers. The expectation that the internet would accelerate the way business is done saw internet-adjacent companies experience a price explosion that is now known as the dot-com bubble. Some mundane companies enjoyed skyrocketing share prices just for launching a website, similar to how novel crypto startups suddenly found themselves managing eight-figure token economies in late 2017. In both cases, excitement over the disruptive potential of the underlying technology obscured individual use cases, but the consequential crash brought meritocracy back to the market.

The post-bubble lull for tech stocks didn’t mean that the internet was a bust, it just meant that optimism and speculation outpaced innovation. Moreover, it made room for outstanding tech companies to rise above the noise. Amazon, for instance, represents one of the biggest success stories and performances of all time. Yet, shares collapsed 95 percent during the dot-com boom to as little as $6.00 per share. 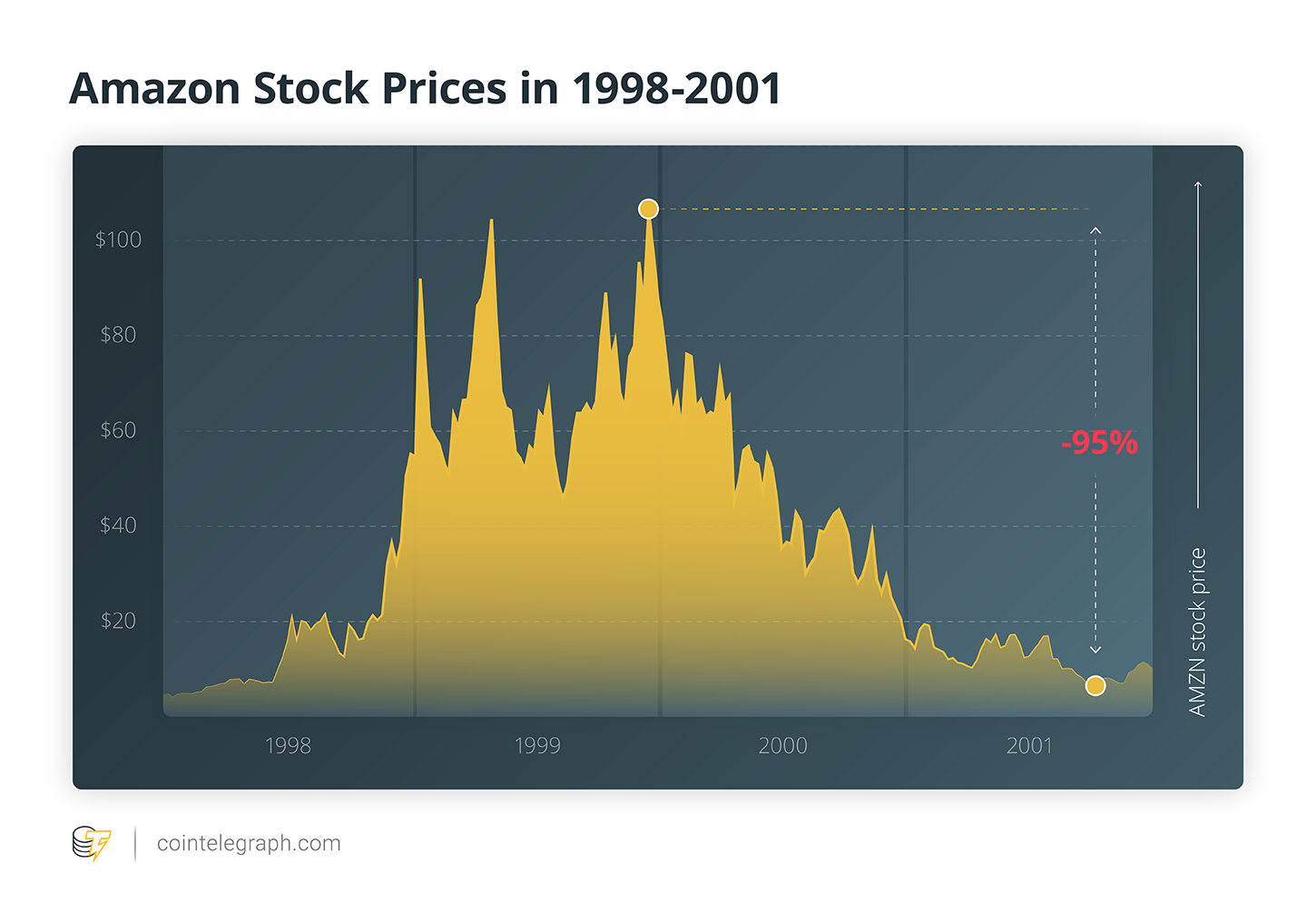 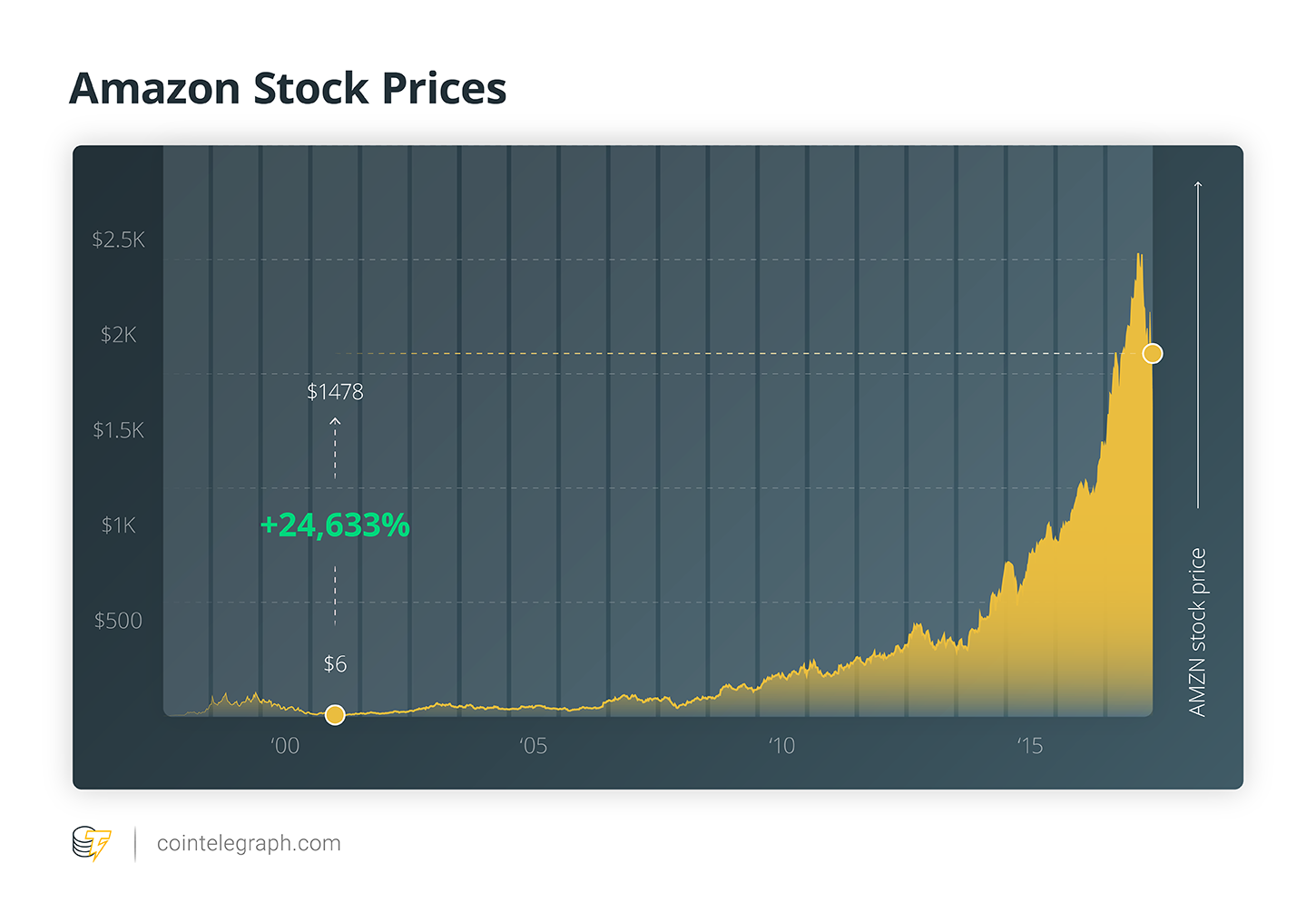 The same story also played out for other one-time occupants of the share price trenches like Oracle, Adobe, SanDisk and others. The crypto bubble popping would help separate the winners from the losers. The next time prices reach previous levels, it could be on the backs of companies that leverage blockchain to deliver tangible, real-world value. Does that mean the entire market will rise? For stocks it did. Just look at the NASDAQ-100 chart below: 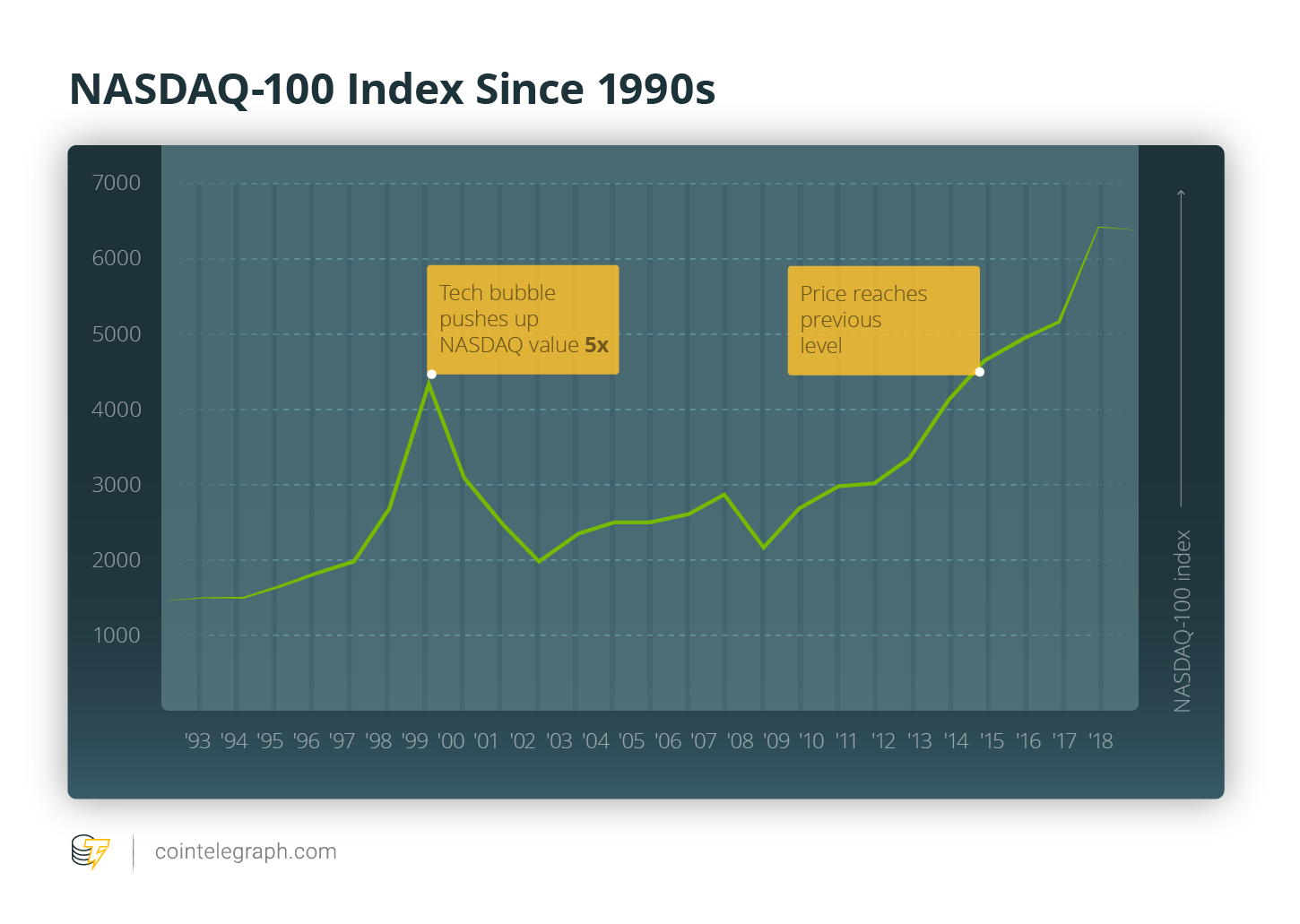 Crypto of cause might generate the same interest and value that it once did — but this isn’t the question.   Would Bitcoin — the unofficial barometer of the market — reach its peak price again just as NASDAQ did? This is inconclusive. Bitcoin has value individually, but also functions as a gateway for fiat to enter into the greater crypto space. However, if blockchain will create compliant fiat gateways and fundraising methods in the future, Bitcoin and cryptocurrency prices could decouple from the value delivered by blockchain. In this case, its chart might slowly grind down to zero as the power of blockchain escapes the confines of its existing fundraising model.

The formal definition of a commodity is a standardized, basic good that is used in commerce and is interchangeable in nature in terms of its physical attributes. While, in principle, this is the notion underlying the commodities market, there are nevertheless shades of grey in reality.  Take crude oil, for instance. Although there are two major contracts (West Texas Intermediate and Brent), there are multiple grades which vary by location of extraction, density and other important differentiators. Nevertheless, it is widely considered interchangeable despite these inherent subtleties.

In the context of interchangeability, Bitcoin definitely fits the bill of a commodity. Furthermore, Bitcoin shares the distinction of mining when comparing how energy products are extracted, thanks to the process of unlocking new coins and appending new blocks to the blockchain.  However, this is largely where the commodity comparison ends, especially when viewed in the context of demand and how it impacts mining. While both oil and Bitcoin can be looked upon as finite resources that face scarcity — whether natural or artificial — oil suffers from depletion while Bitcoin faces no such constriction.

If anything, the one element that links these disparate commodities is the demand conditions and how that impacts price. Oil producers can ramp production up or down when prices rise or fall, with profitability shrinking when prices are low and margins expanding during times of high prices.

Similarly, Bitcoin attracts more miners at a higher price point versus a lower price point. The main differentiator is the difficulty by which each of these tasks is accomplished, and to a higher degree of utility. Oil powers the planet in one form or another by providing energy generation, whereas the use cases for Bitcoin remain limited in terms of applicability (though they grow alongside the ecosystem). While one powers the global economy, the other uses power to sustain itself as the mode of value transfer for and between blockchain ideas. However, the relationship does underline the sensitivity of prices to demand and how it changes the supply-side fundamentals. 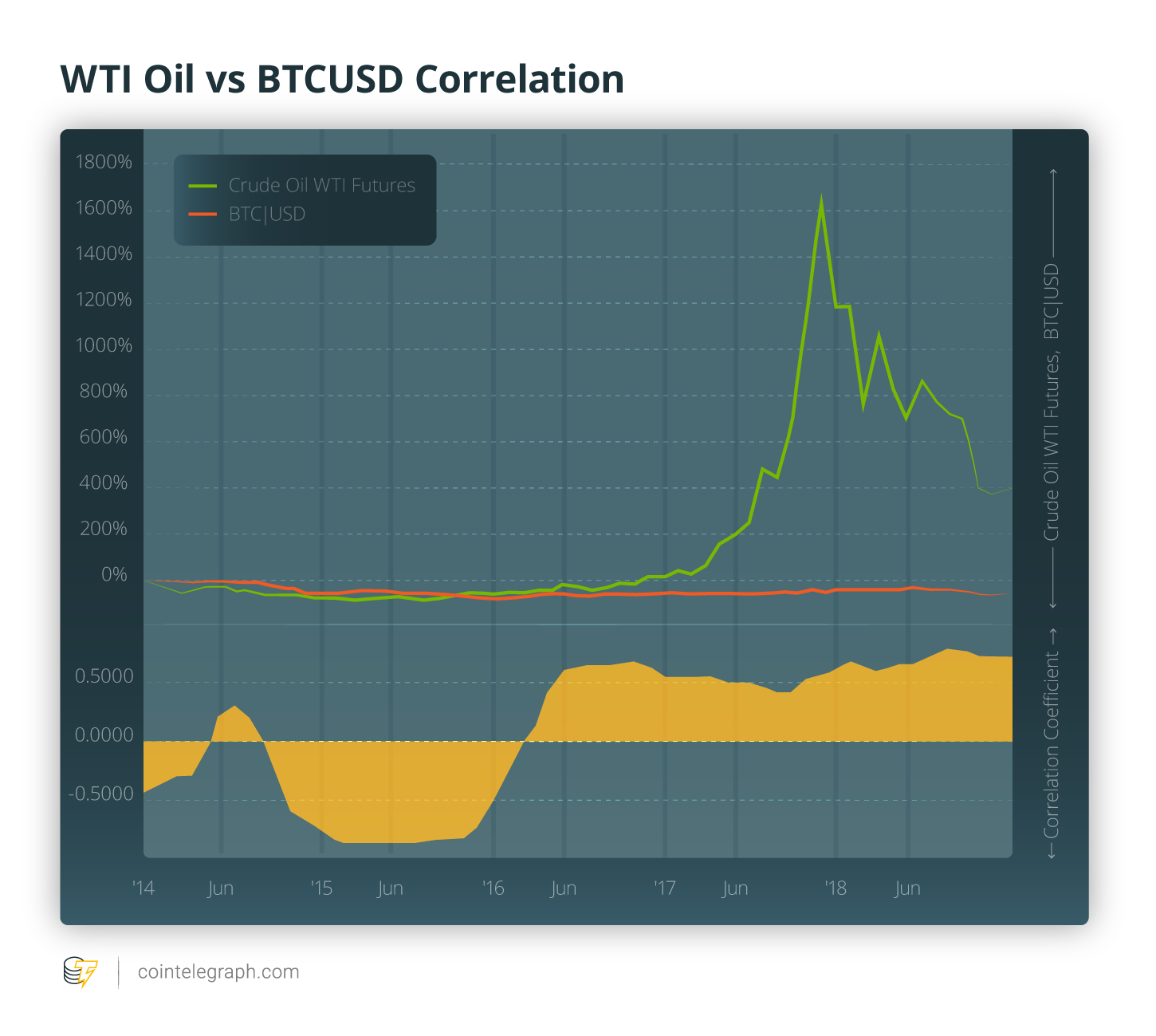 Looking strictly at a performance perspective, though, despite oil’s more practical nature (generating the electricity and power needed to move our modern economy), Bitcoin’s longer-term performance casts a long shadow over oil prices during the last five years, when cryptocurrency trading picked up momentum and entered more mainstream discourse. While the correlation coefficient displays a changing, but generally positive relationship between the two instruments, it is anything but consistent. During the period, Bitcoin priced in U.S. dollars rose by 250.33 percent, easily outpacing the 51.10 percent decline experienced by oil prices over the same time frame.

While the outlook presents more questions than answers, interpreting these queries within a historical context does shed some light on the potential outcome scenarios, as enthusiasts and investors alike evaluate the next steps for crypto.

Original story and image from: https://cointelegraph.com/news/bitcoin-vs-traditional-assets-how-does-cryptos-10-year-performance-sync-up