Today, August 21, at BlockShow Americas 2018, speakers at a blockchain-related panel debated the question of the Bitcoin (BTC) blockchain’s decentralization and the benefits of its applications to the global community.

At the discussion panel titled “The Great Controversy: Blockchain as Seen From Major Institutions’ Perspective,” participants argued about the actual need for blockchain applications in payment systems and questioned the decentralized nature of the Bitcoin blockchain, as well as its practical implementation by major financial institutions.

Nouriel Roubini, CEO of Roubini Macro Associates, claimed that the fintech industry “has nothing to do with blockchain,” arguing that “billions of people” manage to conduct “billions of transactions” everyday by using traditional digital payment systems such as AliPay, WeChat Pay, Square, PayPal, and others. 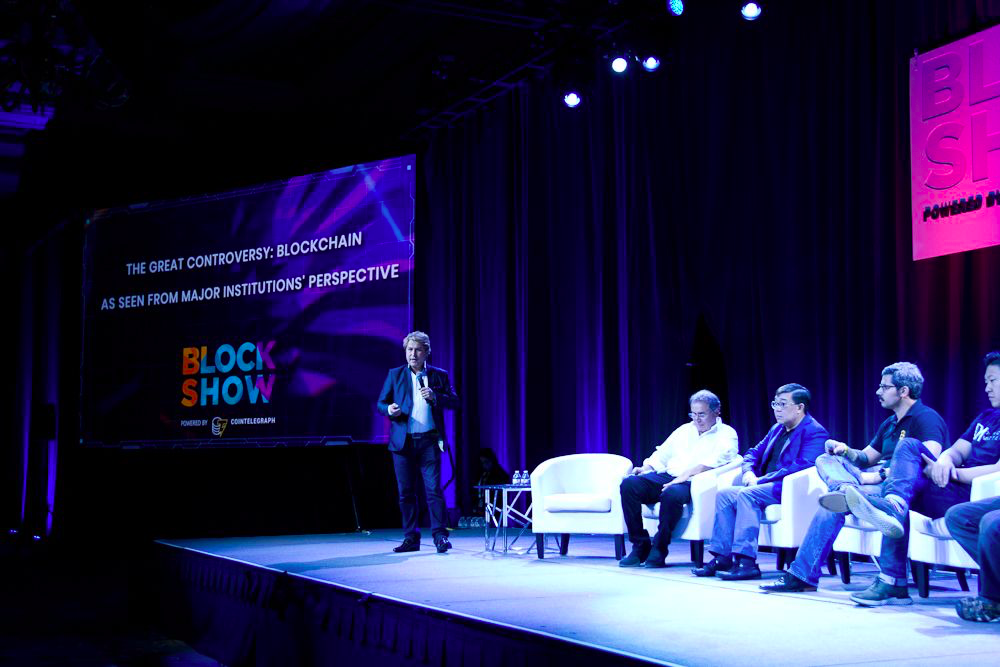 Moderator David Drake and the speakers of “The Great Controversy: Blockchain as Seen From Major Institutions’ Perspective” panel at BlockShow Americas 2018. Source: Buying.com

Roubini, who had predicted the financial crisis of 2008 and previously claimed that Bitcoin will “find its end,” stated that the basics of fintech, such as artificial intelligence (AI), big data, Internet of Things (IoT), capital markets, and others, have “zero” to do with crypto or blockchain technology. Instead, according to Roubini, the “real financial firms and projects” make “real money” by truly “revolutionizing and democratizing the financial system”:

While Vays agreed with Roubini that Bitcoin and blockchain are not the best competitors for traditional payment systems, the industry expert still cited three main reasons for Bitcoin to be able to compete on the matter, including its decentralized nature and decentralized transactions, as well as Bitcoin’s scarcity that makes it similar to gold.

Considering Bitcoin’s decentralization, Vays noted that the emergence of Bitcoin has “for the first time in human’s history” enabled an asset that is “unconfiscatable.” According to Vays, the only way to possess an asset that is not possible to be confiscated is by owning Bitcoin, noting:

In turn, Roubini challenged one single point cited by Vays, claiming that Bitcoin is actually confiscatable since it is subject to regulation, adding that there will be “no anonymity in Bitcoin or any other cryptocurrency” since those kinds of assets must be declared due to tax and anti-money laundering (AML) policies:

“It is a delusion to believe that this asset is anonymous and cannot be confiscated. Nonsense.”

BlockShow Americas 2018 kicked off yesterday in Las Vegas, gathering more than 1,500 attendees and 80 speakers in the crypto and blockchain industries. During the first day of the event, industry experts discussed such major issues as new perspectives offered by the technologies, the question of interaction between major financial institutions and crypto, as well as the role of a proper regulatory approach to bring on the “blockchain future.”