August 9: The summer crypto rollercoaster continues, as the market sees a healthy rebound into the green after sustaining major losses yesterday.

On August 8  total market capitalization had shrunk to $219 billion –– its lowest level since mid-November 2017. In today’s upward bounce, virtually all of the major cryptocurrencies have posted gains, as data from Coin360 shows. 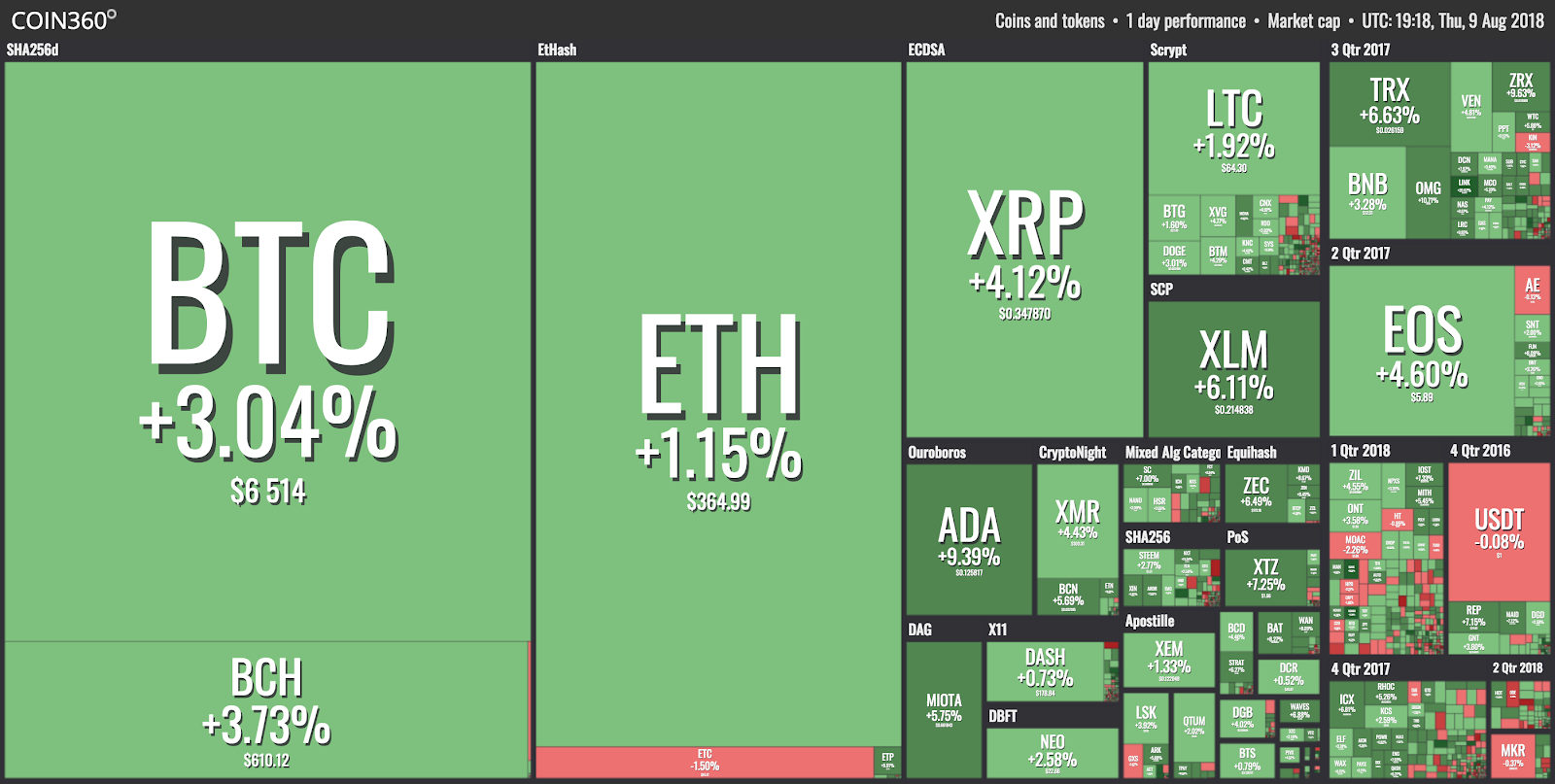 Bitcoin (BTC) is trading at a solid $6,500 at press time, up around 3.2 percent on the day. The leading cryptocurrency shot up around $300 within the space of two hours earlier today, from $6,229 to $6,528. Having since slightly corrected downwards, the coin is nonetheless trading $330 higher at press time than its 24-hour low at $6,144. Bitcoin’s weekly losses however remain at a stark 14 percent, with a more modest 3.5 percentage loss on the month. 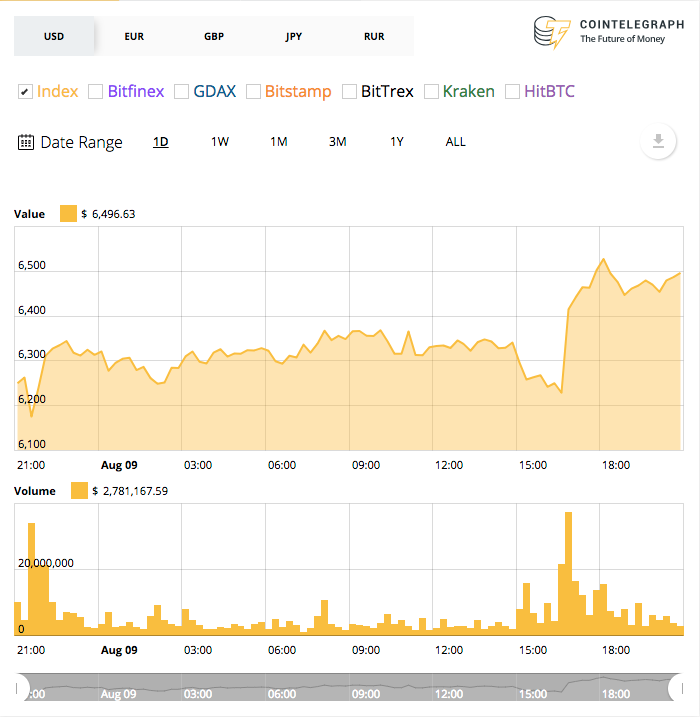 While today’s sprightly uptick may assuage some edgy crypto nerves, Dogecoin creator Jackson Palmer has been eyeing the recent plummeting markets, which many attributed to U.S. regulators’ announcement August 7 that they would be delaying their decision over whether or not to approve a high-profile BTC exchange-traded-fund (ETF).

In a thread of tweets this morning, Palmer pointed to data showing declining daily transaction rates for Bitcoin, Ethereum (ETH) and Ripple (XRP), as well as a downtrend in decentralized application (dApp) usage, as more noteworthy indicators of the “fragility” of the space.

More optimistically, Litecoin (LTC) creator Charlie Lee said in a tweet today that he considers the bear market to be “the best time for people to work on adoption.”

Ethereum (ETH) is currently trading around $363, up around one percent on the day to press time. The altcoin’s intraday spike closely correlated with that of Bitcoin, as it jumped up from $352 to $367 within two hours. Ethereum’s losses on its weekly chart remain at around 11 percent, with monthly losses pushing 24 percent. 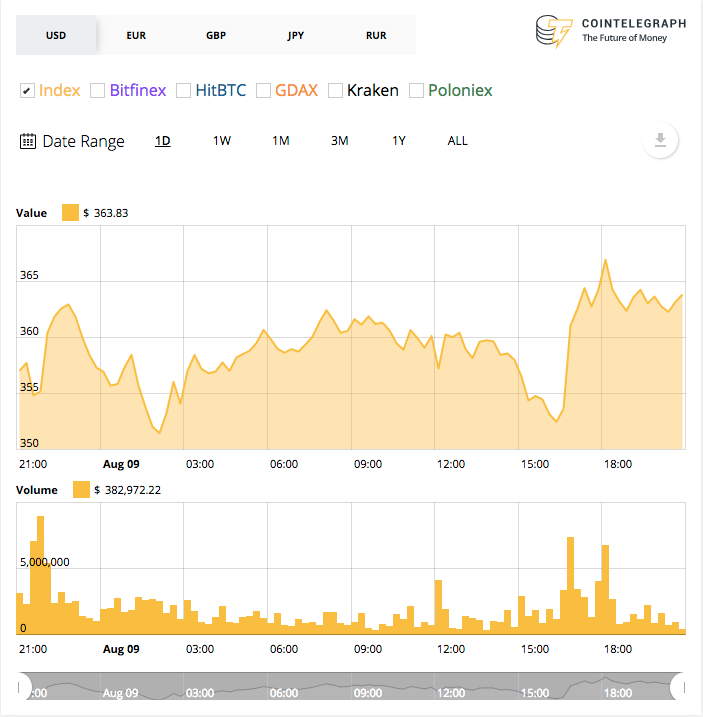 On CoinMarketCap’s listings, all of the top twenty coins by market cap, except one, are in the green, seeing solid gains within a 1 to 9 percent range.

Cardano (ADA) is the strongest performer among the top ten, seeing around 8 percent in growth to trade at $0.12 at press time.

Stellar (XLM) and EOS (EOS), and IOTA (MIOTA) are also seeing solid gains, all up 4-7 percent on the day.

Among the top twenty coins by market cap, Ethereum Classic (ETC) is the only alt in the red, the first day it has seen losses after a strong bull run all week that defied the wider bear market. After riding a wave of positive momentum triggered by news of its August 7 listing on popular U.S. crypto exchange and wallet service provider Coinbase, the alt has dropped slightly by around 2 percent today to trade at $15.04 at press time. 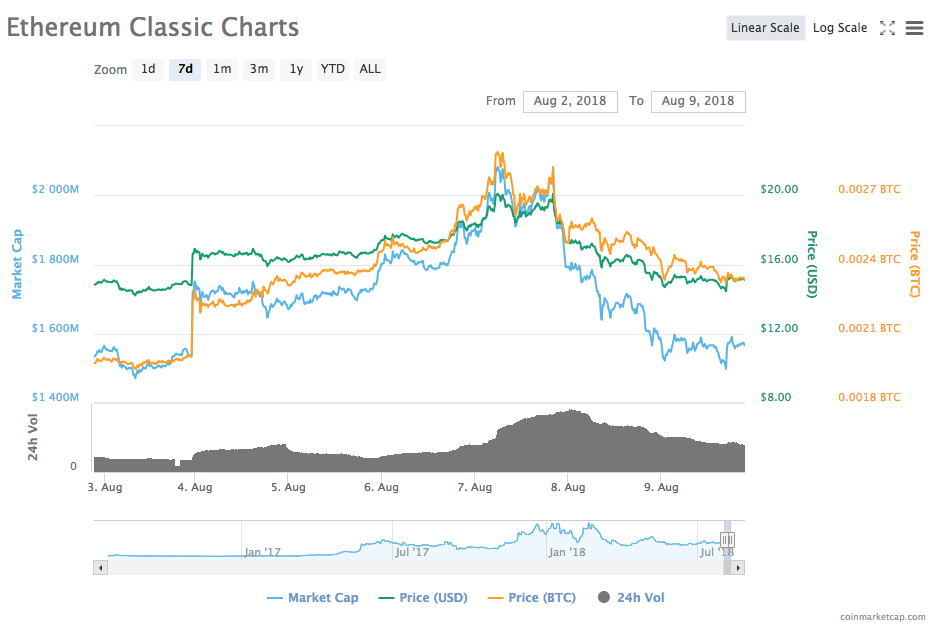 Tezos (XTZ) –– ranked 18th –– is up a bullish 6.22 percent on the day to trade at $1.65 at press time. This strong growth comes despite the project’s latest setback in an ongoing securities class action against its controversial $232 million Initial Coin Offering (ICO) in an American court this week. 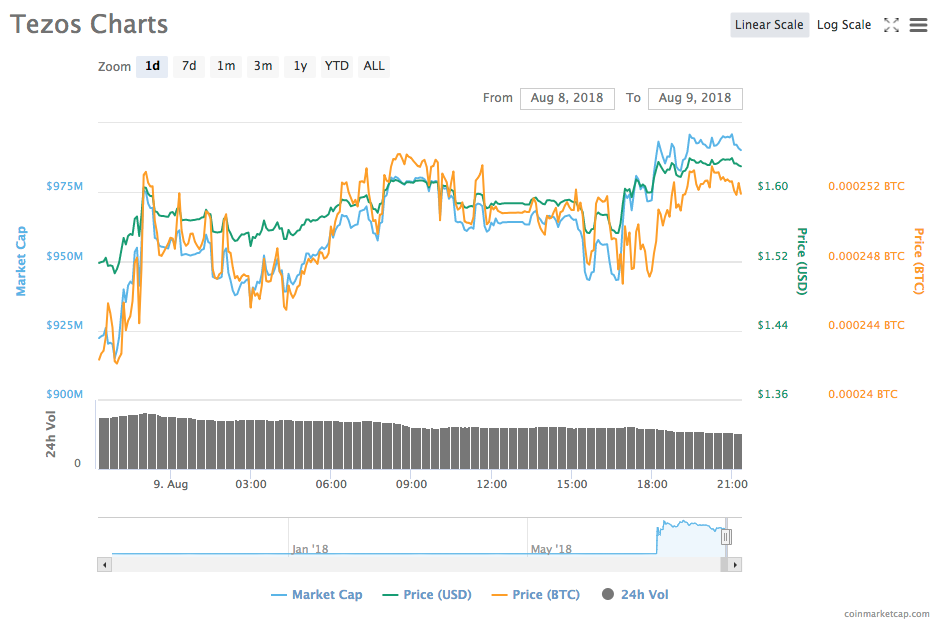 Total market capitalization of all cryptocurrencies is around $228.6 billion at press time, up over $9 billion from yesterday’s aforementioned $219 billion low. 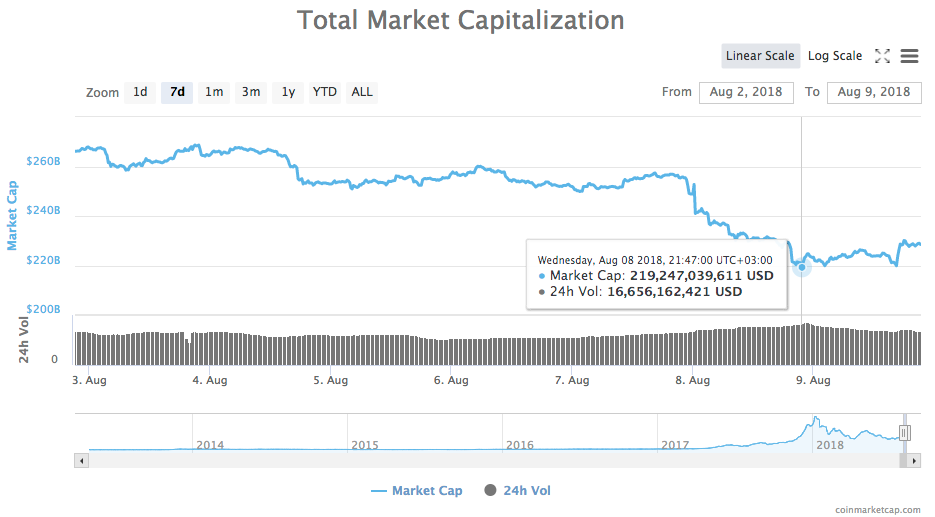 As the dizzying vagaries of the crypto markets leave some reeling, a team of financial experts from Yale University have this week suggested a system of factors to predict price trends in major cryptocurrencies.

They found that cryptocurrencies “have no exposure” to most common stock markets, nor to returns of currencies and commodities and macroeconomic factors. Instead, they identified crypto-specific patterns, including a “strong time-series momentum effect” among major assets such as Bitcoin, Ethereum and Ripple, as well as a correlation between price and investor attention, which they deduced via social media and search engine trend analyses.

Commenting on this “investor attention,” Pantera Capital CEO Dan Morehead today said that crypto markets have recently witnessed something of an overreaction from investors in response to short-term news, such as the SEC’s Bitcoin ETF delay